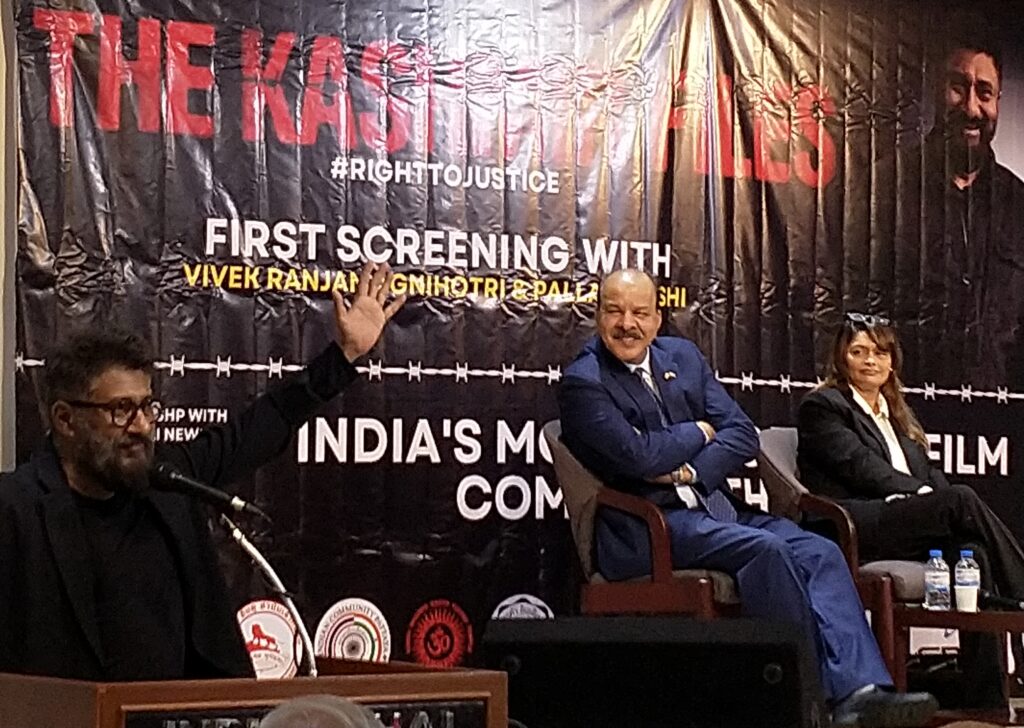 The much- talked- about Indian film, screened recently in Bangkok, talks of the Kashmir Hindu Genocide, for the first time.

So, what’s the big deal about the Indian film Kashmir Files, which led to public processions, court orders, a media frenzy in India, and has been banned in countries like Singapore and Malaysia -?

It had its first official international screening at Bangkok in April, soon after holding pre-release screenings at more than 36 cities in the US.

In Bangkok, one was aware that a certain Muslim Embassy, not favorably disposed to India, complained to MFA and tried to stop the special screening of the film for an invited audience, including diplomats. The film, which was passed by the Censors, was eventually screened at a well-known theatre, with police support, and a 500-strong audience., including members from the Thai PM’s office.

The big deal about the film, is due to one word- Kashmir. India’s most beautiful state, often described as ‘Heaven on Earth ‘, has today become the country’s most contentious valley. Two wars were fought over its geographical boundaries, with neighboring Pakistan.

Kashmir was a tourists’ paradise (especially for Thai tourist), as also a haven for Bollywood film-shootings, with many ‘hit’ films like Kashmir Ki Kali shot there.

Things changed in the 90s, with the onset of terrorism which took communal undertones. Militant groups like the JKLF (Jammu and Kashmir Liberation Front) targeted the minority Hindu community, who were forced to flee from the state, under the threat of the most severe violence.

This is the theme of Kashmir Files, which portrays the horrifying violence of the terrorist attacks on the Hindus for the first time, including a notorious genocide.

Kashmir Files lifts the lid on the ‘heaven’ that was once Kashmir and shows us the ‘hell’ that the stunningly beautiful state has descended to.

“After 32 years, our story has finally been told “said DK Bakshi, chief organizer of the screening in Bangkok, and one of the founder-members of the Global Kashmir Pundit Diaspora, who have been screening the film in various parts of the world. He is one of the many Kashmiri Hindu Pundits whose family was forced to flee from the valley, and who now spends his time between Thailand and Canada.

Director Vivek Agnihotri and actress-wife Pallavi Joshi spent more than 4 years researching on the film, where they studied more than 700 case-studies of evicted Kashmiris, around the world, and recorded their shocking stories.

“Their stories were beyond humanity” they stated during a Q & A session, at Chulalongkorn Varsity in Bangkok.

The director said he started wearing black, after that- “It’s a color which absorbs everything.”

He changed his draft 22 times, before he decided to make the film.

The genocide scene is easily the most shocking sequence in a film that unrelentingly portrays the brutality of the terrorist attacks on the Hindu community in Kashmir.

“We were the medium, who gave a voice to the voiceless-” said the film’s director.

When this writer asked him if the film would polarize people and lead to a certain Islamophobia, the director disagreed.

“It’s the elitists who use such words” he retorted “the film has reached out to people at all levels, including the man on the street.”

He informed that in the US, “People of different ethnicities – Blacks, Hispanics, Armenians” were all moved by the film.”

The film has been seen released in countries as diverse as Japan, Finland, Mozambique.

It was supposed to have been released in UAE, the first Muslim country who agreed to screen it. But it was cancelled at the last moment.

Agnihotri stated that his main aim in the film was to “Change the narrative about Kashmir, which has not been done before.”

The film is, indeed, a message-oriented drama, not a mainstream entertainer, but surprisingly, it went on to do amazingly well at the box-office, gathering more than 2500 million rupees, like a mega Bollywood extravaganza.

The Director admitted that this was an unexpected blessing, especially as they had faced umpteen hurdles to make it, starting from lack of funds and ending with Covid-delays.

That why he spoke a lot about ‘Divinity and Spirituality ‘, at his second talk-session in the Indo-Thai Chamber of Commerce in Bangkok.

Infect, at his talk-sessions around the world, including at Washington’s Capitol Hill, Agnihotri spoke at length about the all-important concept of’ Humanity’.

One must admit one does not find this humanism, in Kashmir Files which is studded with violence, bigotry, extremism.  When asked why the movie was not more ‘nuanced’ the Director stated shortly

“Terrorism has no nuance.”

He stated with feeling- “Kashmir was once called the ‘Cradle of Civilization’, a knowledge-center, global university. It believed in arts, culture, education, the one-ness of humanity.”

Sadly, all that has been eroded from this once-ideal state.

That is why the final speech, spoken by the young, dynamic student-leader ‘Krishna Pundit’, in the film, extolling the old greatness of Kashmir, becomes all-important

It is, indeed, the voice of the Director, talking to world-audiences, about a superior state, that today, has been destroyed by politics, divisiveness, terrorism.

Agnihotri stated that the story of Kashmir reminded him of the story of the great Indian epic ‘Mahabharata’, about the war between two great groups of people who were once brothers, and later became bitter enemies.  It’s not a coincidence that every Hindu character in the film is named after an Indian God.

As far as this Director is concerned, Kashmir is a ‘divine’ state that has now become destroyed by the politics of humanity.

So, what was the next step for Kashmir?

“That’s not in my hands, but in the hands of our politicians and leaders” said the director, adding “I’m only a researcher and film-maker”.

Agnihotri’s earlier film Tashkent Files, in 2019, created huge waves, by questioning the circumstances under which the Indian Prime Minister Lal Bahadur Shastra suddenly died in 1966, at Tashkent, after signing a Treaty with his Pakistani counterpart.

“It’s called Delhi Files, and we are doing extensive research on it. It will bring the whole country under the radar-“   he declared, with pride.