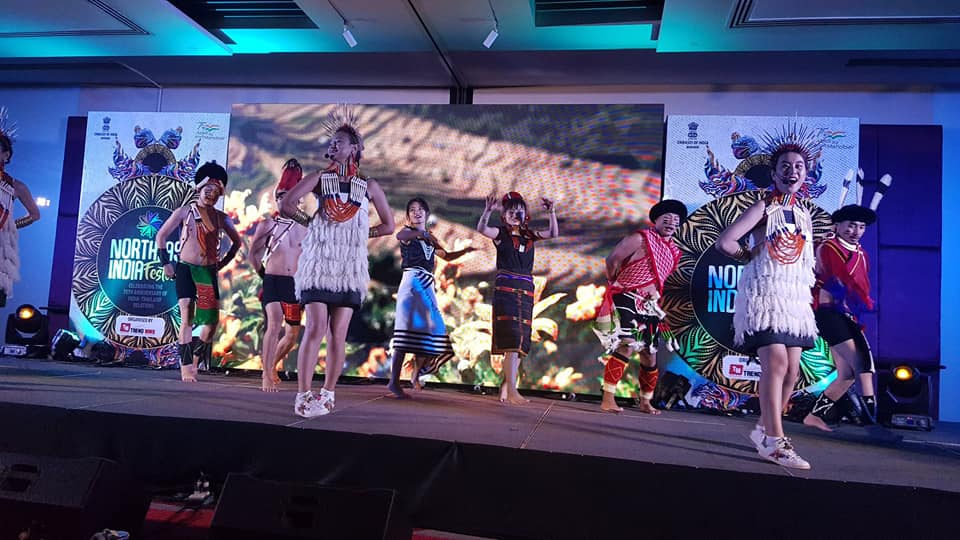 The second edition of the Northeast India Festival in Bangkok rose several notches higher in terms of grandeur and scale than the previous festival held in 2019. For starters, it was attended by top-level ministers from both countries.

The opening was presided by the Deputy Prime Minster of Thailand Jurin Laksanawisit, and Indian Union minister of state for external affairs Rajkumar Ranjan Singh.

There was also a bevy of chief ministers, besides the tourism and revenue ministers from the Northeast Indian states, not to forget senior bureaucrats, trade representatives and directors of the tourism departments.

The seminars on tourism and trade were of a very high order, as also the “People to People” exchange involving historians and academics from both countries. They gave unique details of the many connections between Thailand and the Northeast Indian states.

Rajkumar Ranjan Singh was proud that the trade between India and Thailand increased to as much as $15 billion, in 2021-22, in spite of Covid. He sought for more investments in the Northeast region.

“We will focus on our future relationship with Thailand, through commerce, culture and connectivity,” he stated, informing his audience that Gauhati and Imphal already had international airports, and Agartala would get one soon.Twenty rail routes would be launched to connect the eight Northeast states.

Connectivity was the buzzword at the two-day meet, and many of the speakers held forth on the importance of the 875-mile Tripartite Highway between India, Thailand and Burma. This is almost ready, but has not been opened due to political problems in Burma.

At the tourism seminar, Tanes Petsuwan, deputy governor of TAT (Tourism Authority of Thailand) hoped that there would be more air connections between Bangkok and the Northeast Indian region.. He informed that Air Asia would possibly be starting flights from Gauhati and Imphal to Bangkok. At the moment, all the connections are via Kolkata, which has at least four airlines flying to Thailand.

The CMs of some of the states admitted that they had faced the problems of insurgency earlier, but averred that it has been stamped out.

The Mizoram minister of state for tourism, Robert Romawia Royte, informed his audience that his was the first state in the country to launch a “Resposnsible Mizoram Tourism Policy” in order to promote sustainable tourism. He also announced an international travel conference to be held in the state later this year which would be their first attempt to gain a global image.

Rituparna Baruah, chairman of the Assam Tourism Development Corporation, spoke of the huge connection with Thailand through the large Tai Ahoum community in Assam. He said this unique connection should be an important starting point for tourism between the two countries.

“We should continue to engage with Thailand, well after this event is over,” said Conrad K. Sangma, adding emphatically “We need 4 P’s for this — political will, policy, people and paisa.”

The last word came from Neiphiu Rio, the chief minister of Nagaland: “We are small states, but if we can get together we can do big things.”

He said he planned a follow-up meeting with all the chief ministers when they returned to their states. In fact, his delegation was the largest with 156 people, and they spoke of everything from the renowned Hornbill Festival to their “Vanguard Village”, Asia’s first Green Village.

At the trade seminar, there were presentations from first-time entrepreneurs, dealing with products as varied as pickles, tea, coffee, electronics, textiles and fashion. There were about 30 small and medium enterprises which participated and displayed their products in an exhibition that was an important part of the festival.

Peter Thawngneihchina of the National Small Industries Corporation Ltd dropped the important information that they gave monetary support to entrepreneurs, both machinery and capital.

The “People to People” session included numerous scholars and historians who enumerated the many similarities between Thai customs and those from Northeast India in terms of festivals (Songkran), rituals (sacred thread on hand), food (bamboo shoot and glutinous rice) and much else. An important Thai speaker was Korn Dabbaransi, former Deputy PM, and president of the Thai-India Friendship Association.

Apart from the Tai Ahoum community, one also heard of the Tai Khamti tribes, whose ancestors were from Thailand. It’s not a coincidence that the revered Thai Princess Mahachakri Sirindhorn visited northeast India twice to know more about these links with Thailand.

The repeated refrain at the session was that the festival should be held in Thailand every year, so that the interaction between the Tai and Thai communities became closer.

The evenings of the two-day festival were devoted to stunning cultural shows at the open-air grounds of the well-known Central World mall. More than 400 artistes were seen in performance.

What was most impressive to see was the seamless amalgam of traditional folk forms with the best of modern sound and light design, which made the cultural extravaganza appealing to the audience. Whether it was the Bhihu or Tai Ahoum dance, the Manipur Rhythms or the Nagaland drummers, the shows were electrifying. With rock and pop bands also being popular in places like Shillong and Imphal, we heard brilliant bands like Soulmate. A major highlight of this year’s Northeast India Festival was collaboration with Thai artists.

And so, there was the grand amalgam of the Thai Khon dance (complete with mask and music), with drummers and dancers from Arunachal Pradesh. The Thai dance master Kriskrit who choreographed this number said he was a great lover of India and had visited the country many times.

Top Thai artistes also performed at the festival, including the pulsating Stamp rock band and well-known Thai actress/singer Ann Meechai who has acted in a Bollywood film. The gorgeous 2021Ms Earth Thailand Baitong Jareera, was the show-stopper.

The eight fashion houses who took part at the festival ranged from the globally renowned Robert Naorem from Manipur to the highly individualistic Pella from Assam, and portrayed how the diverse textiles of the Northeast region, especially the silks, could be transformed to costumes for any occasion and style. Cuisine of the different states of Northeast India were also served, many of which displayed similarities with Thai food.

The festival was indeed a holistic and spectacular introduction to the rich and varied attractions of this unique part of India. It was the best representation of India’s Look East policy. It was also a fit way to celebrate the 75th Anniversary of Indo-Thai Diplomatic Relations.

One thought on “Bangkok swings to N-E beats”