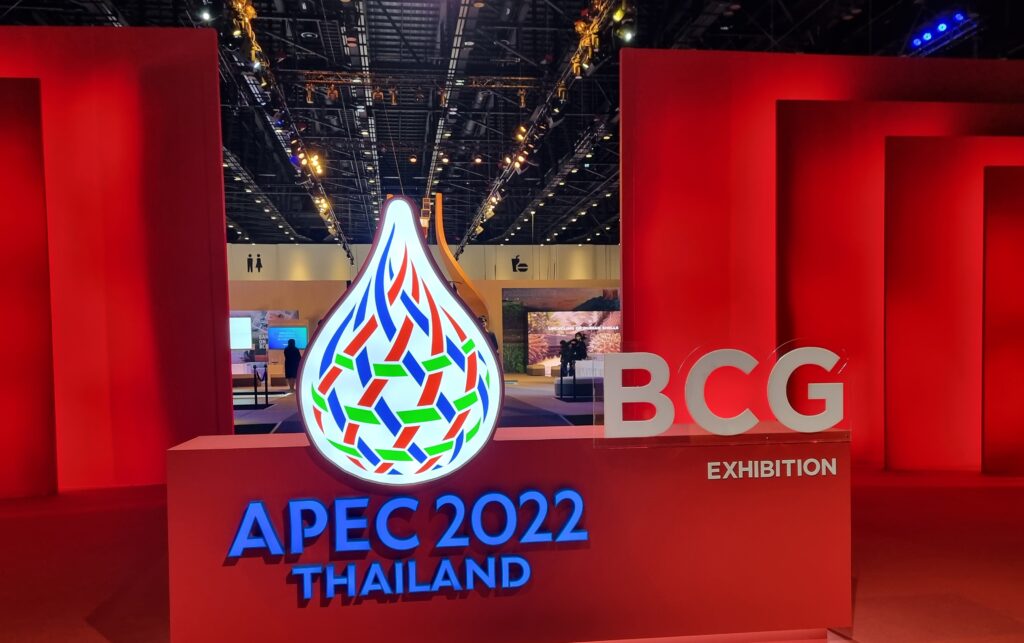 SUSTAINIBILITY WAS KEY-THEME, AT 2022 APEC SUMMIT

The 2022 Asia-Pacific Economic Cooperation (APEC) Summit  was the first global event in Thailand, after the 4-year pandemic.

The APEC bloc of 21 countries, makes up 60% of global GDP, and accounts for 47% of the volume of world trade.

While their main aim is to discuss trade and business challenges in the region, this year’s Summit pushed forward the Bio-Circular Green Economy  (BCG) Model that Thailand has been actively promoting, in all spheres of  public and private enterprises.

Infact, one of the most important  achievements of the Summit, was that the Bangkok Goals on the BCG Economy Model, were accepted and endorsed in the APEC 22 Declaration.

To this writer, the BCG Model was obvious in every aspect of the  APEC Meet.

The Theme of Open, Connect, Balance reiterated the link between the ‘opening’ of  businesses, ‘connecting’ with all aspects, and keeping a ‘balance’ with the environment.

That’s why the  ‘Chalom’ or traditional Thai bamboo basket was the symbol  of the Meet and  was handed over to US Vice President Kamala Harris at the end of the  conference, as the  US will host the next APEC Meet in 2023.

The bamboo decorations were everywhere at the  Queen Sirikit Centre, where the Apec Meet was held. The souvenirs  for media, delegates, participants, were all made of recycled materials.

The large Media Room was a Carbon Neutral room where no paper was used , all info was shared online, and most impressive, was to see the regular statistics on the big screens, about the carbon footprints being saved during the Conference, and how many tree-plantings they could be translated into.

These measures were part of a   unique ‘Save the Bear campaign’, started in 2018 by the Stock Exchange of Thailand , which described itself as a ‘Measurable Project’ or ‘Carbon Textonmy.’

They informed that, by reducing waste in everything, from  food  to packaging, transportation, decorations, 7482 kg of carbon dioxide  would  be reduced, equivalent to 831 trees being planted!

All the 33 Booths at the Apec Meet,  subscribed to this  ‘Measurable Project’. It was indeed proof of  ‘walking the talk.’

Among the Companies, was the WHA group, whose specialty was  waste management.

The ‘Energy Absolute’ company’s  specialty was EVC vehicles, and they supplied the  electric buses and ferries at the Apec Meet. They planned to transform  at least 3000 buses in the city shortly.

Bangchak Corporation was the first company in Thailand that started the concept of renewable energy, in the 90’s. They are now into bio diesel, gasohol, and also sustainable aviation oil.

The Amata Company , noted for their smart city concepts, fitted in with the  BCG concepts,  where technology and innovation were used, to create value, reduce waste, and promote a sustainable business model.

The Kasikorn Bank had a 3-point policy where they gave loans only to those who followed sustainable standards. Their own central office in Bangkok, was a 100% zero waste building, with 100% green energy, and used 100% solar energy.

Meanwhile the Bitkub Metaverse, the largest block chain company in SE Asia, said they saved energy by using crypto currency, and were in negotiation with various companies and ministries to use the ‘carbon credit’ system.

There were also top lifestyle and consumer companies like Siam Piwat ,Thai Bev, who worked closely with communities, and had strong sustainibility standards.

TAT (Tourism Authority of Thailand) spoke of the strong sustainability standards in most hotels of the country today. They were also proud of their  Eco Tourism and community-based programs.

One of the most impressive features of the Apec Meet, was the BCG Exhibition, where a wide range of companies, small and big, displayed their sustainability procedures and products, in many fields- agriculture, industry, tourism. Big companies like GC ( the chemical company of the well-known PTT oil refinery conglomerate), as well as small ones like Bope, Gemio, displayed  sleek home products and fashion garments, created out of recycled materials.

During the Apec Meet, media-tours were arranged to two singularly impressive sites- the new Forrestias building complex, which is the biggest urban green oasis in the city, with 56% green spaces, in 93 acres of land. It has 500 species of plants, birds, canopy-walks, thermal insulation, waste and water management systems. ‘ Living in Nature, Connected to the world: is their tag-line.

Our next media tour was to the amazing RISC Centre (Research & Innovation For Sustainability Centre), the multi-dimensional research center that brings specialists from many fields to improve real estate development, especially in areas like ecology and environmental design. ‘Sustainovation’– innovation in sustainable technology- is their key word. It was fascinating to see the holistic concepts of the Centre, with its natural lighting, regulated temperature, indoor plants, vinyl flooring, and amazing products made from  recycled materials.

One was happy to hear that the parent MODC company, has started a Centre in New Delhi.

Last but not the least, mention must be made of the Eastern Economic Corridor Centre (EEC), in three provinces of Thailand, which epitomizes the amalgam of hi-tech and bio-tech, as well as smooth collaboration between private and public enterprises.They are working on the UN’s sustainable goal of being Carbon Net Zero, by 2030.

SCGC called themselves a carbon-intensive company, with digital solutions, for their bio-circular economy.  Mitr Phol, the sugar-company, was into bio-energy in a big way.

The companies  spoke about their collaborations with India, for the  digital processes.

This writer also visited the Easter Economic Corridor ‘s Innovation City in Rayong, and was impressed to see a Phenomics Greenhouse and Bio Refinery, all subscribing to the BCG Model .

It was also good to know that the companies had collaboration with many local Universities,  so that the contemporary youth could be made aware of the BCG model.

It was not a coincidence at all, that the Bangkok Model of BCG Economy was included in the APEC 22 Declaration. Kudos to the host country.