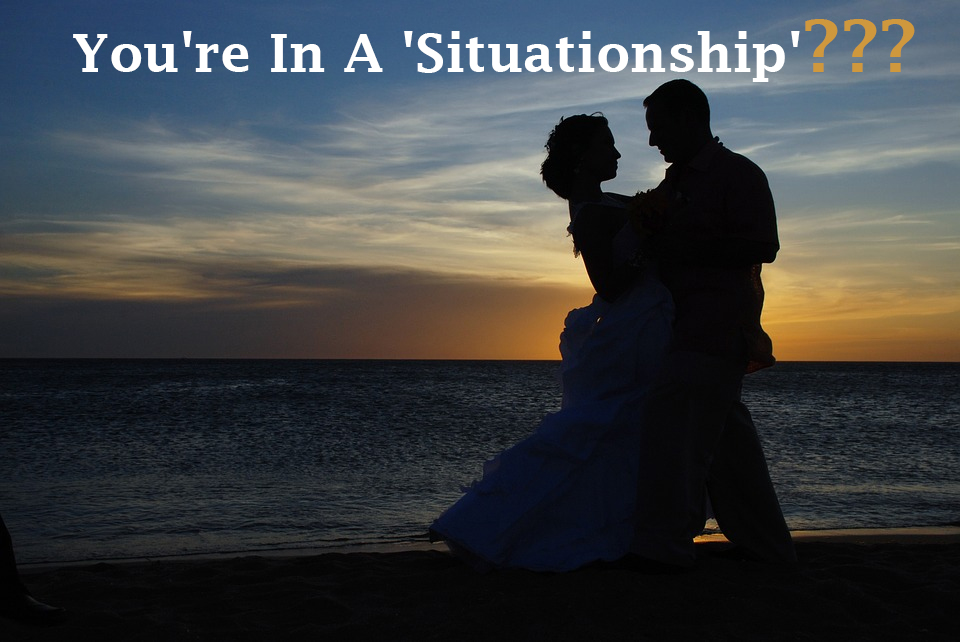 Non-committal relationships are so common, it seems like a new Urban Dictionary term for a casual something-or-other is coined every single day. First, there was “booty call.” Next: “friends with benefits.” And now: “situationship.” So what, exactly, does the buzzy term mean?

Lurie adds that such a dynamic can be temporary, like after you’ve gone on a few dates with someone, but it’s still too early to discuss relationship status, or it can be the definition of the relationship, “like if you’re in a city on a short-term assignment and start seeing someone casually.”

Expanding on that, Jess Carbino, PhD, former sociologist for Tinder and Bumble, stresses that labels can help create meaning and define expectations around relationships. “Situationships can be defined as a romantic relationship that lacks commitment and the associated norms and expectations,” she says.

“Online dating apps have created this paradox of choice,” says Christie Tcharkhoutian, PhD, LMFT, a senior matchmaker with Three Day Rule in Los Angeles. “We have so many options, it’s hard to commit to that person in front of us because when they go to the bathroom, we can just swipe.” (Guilty as charged.)

Sometimes, having undefined relationships is totally cool. It can be fun, sexually satisfying, liberating even. Plus, a situationship “gives you time to get to know somebody without feeling pressured to make a decision,” Tcharkhoutian says.

The problem is, more often than not, at least one partner “catches feelings,” finds Abby Medcalf, PhD, a relationship expert, author, and speaker in Berkeley, California.

There’s an actual physiological reaction that happens when you’re intimate with someone. More specifically, the bonding hormone oxytocin gets released when you have sex, cuddle, or even just hug, says Medcalf, and you can’t override it. Dang biology.

Once emotions build, being in a situationship can totally blow. “You start to feel rejected because the person doesn’t want you fully,” Medcalf says.

So here’s how to tell if you’re actually on that road–and how to pull over before you crash and burn.

The Pros and Cons of Situationships

Let’s examine the benefits and drawbacks of situationships before doing a deep dive into whether your ‘ship fits the bill.

Now, that you’ve got all the details, get familiar with all the signs that point to you being in a situationship:

1. There’s no natural evolution or growth.

2. There’s someone else (or multiple others) involved.

Here’s a telling giveaway: “If you discover that your significant other is romantically/sexually involved with one or more other people, you may be in a situationship,” says Harouni Lurie. “Even within a couple that actively practices ethical non-monogamy, ideally there would be clear and defined boundaries in place so that all parties stay informed and can consent to the boundaries of the relationship.”

Again, with situationships, communication ain’t exactly a strong suit, so you may find out this information from mutual friends, social media, or—eek!—chance encounters around town.

3. You only make short-term or last-minute plans.

People in relationships make plans weeks, months, sometimes years in advance. (I know…mind-blow.) People in situationships may operate on a more hourly and daily timeline.

“You’re in a situationship when you’re not getting invited to meet family, and it’s not a given that you’re going to see each other on the weekend or a holiday,” Medcalf says. If all you’re getting is last-minute invites, take the hint: Dating you isn’t their first priority.

One major appeal of a legit relationship is that you can count on seeing and talking to your person regularly. Situationships lack that.

“They’re not asking you to hang out three times a week,” Tcharkhoutian says. Or, even if they are one week, don’t expect that to happen the next one.

Another day, another annoying dating trend you can’t avoid:

5. They always have the same (vague) excuse.

In a situationship, these are excuses. In a relationship, they lead to a plan B: “Let’s celebrate when my presentation is over Thursday.” “Want to go for a run?” “I’ll call you from the road.”

When you’re in a relationship, you make time for your partner, no matter what other life events are going on, Tcharkhoutian says. But in a situationship, she adds, there’s no urge to problem-solve. (Since that would require, ya know, effort.)

6. You mostly small (and dirty) talk.

RELATED STORY250+ Questions To Ask To Get To Know Someone

Sure, you know where the person lives and works, and maybe a few general deets like where they grew up or if they’re a cat or dog person. But let’s be real: You’re more comfortable talking dirty than talking about your fears, insecurities, or lessons from past relationships.

7. You don’t talk about the future.

Likewise, conversations in situationships pretty much only involve the present (“What do you want to watch?” “Pizza or Thai?”). The logic here’s pretty simple: If you’re not in it for the long haul, why talk about it?

If you haven’t had a discussion about the future and what you’re looking for, that could be a sign you’re in a situationship, Medcalf says.

A situationship is basically “just shared activities—hanging out here and there,” Medcalf notes. “It feels directionless.”

8. They tell you that they don’t want to get serious.

The easiest way to know you’re in a situationship: The person tells you that you’re in one.

“Believe what they say,” Medcalf explains. “[People] are not complicated creatures.” (And, hey, at least they told you.)

9. They show you they don’t want to get serious.

When in doubt: Open. Your. Eyes. “People will show you through their actions what they think of you,” Medcalf says. “If they’re not calling, they’re just not that into you.” Some things never change.

“You know you’re in a situationship when you feel anxious because there’s uncertainty, ambiguity, and ambivalence,” Medcalf says.

Research shows that doing new and different things stimulate the brain’s reward system, flooding it with feel-good chemicals (dopamine and norepinephrine). That neurological reward system just happens to be the same part of the brain that lights up in the early stages of romantic love.

Any relationship expert will tell you that keeping a relationship alive means continuously having novel experiences with your partner. But in a situationship, you probably do the same thing over and over—Netflix and chill—and yes, even that can get old.

Okay, so you’re definitely in a situationship. What now?

If you’re cool with what you have and want to keep it that way, first ask yourself: Am I really?

“In some ways, we might be okay with a casual situation, but we might also be thinking, ‘If this is what they need, that’s fine; I can accommodate that,'” Tcharkhoutian says.

Make sure you’re not pushing your own needs and wants aside just because you want to satisfy someone else’s. (Or because you think their feelings might change…they may never.)

And if you actually want more, speak up. Say: “I’ve enjoyed spending time with you,” suggests Tcharkhoutian. Then tell them what you like or appreciate about them, and finally ask for their thoughts on where things might go.

If they come up with an excuse for the casual scenario without an end date—”Work is crazy” instead of “After my real estate exam, I should be able to commit more”—don’t expect things to change.

Either way, “go in with a really clear boundary of what you will and won’t accept,” Medcalf says. “You call the shots.”

Yep, you heard me: You are in control of this ‘ship.

ANNA MEDARIS MILLERAnna Medaris Miller is a writer and editor in New York City who has years of experience reporting and writing on various health topics.

PERRI O. BLUMBERGPerri is a New York City-born-and-based writer; she holds a bachelor’s in psychology from Columbia University and is also a culinary school graduate of the plant-based Natural Gourmet Institute, which is now the Natural Gourmet Center at Institute Of Culinary Education.