On December 10, 2020, the Ambani clan had announced the arrival of the fourth generation of the Ambanis. Check out as we got hold of Mukesh Ambani’s picture with his grandson! 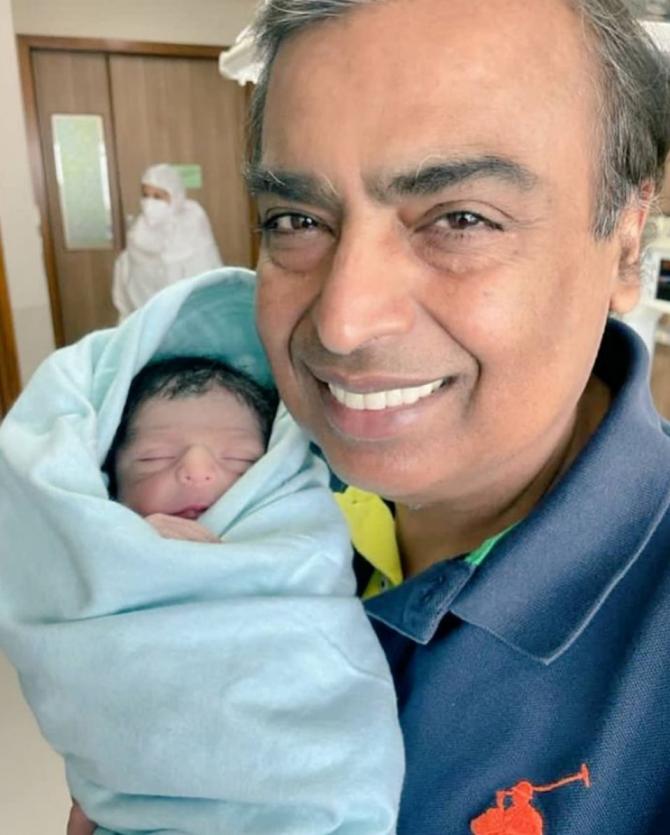 Nothing can ever bring more joy to a family than the birth of a baby. From parents to uncles and grandparents, everyone’s eyes are filled with lots of love and excitement to hold the little bundle of joy in their arms. They not only help the new parents in deciding the name but also setting up the baby nursery and finding the best ensemble for the little baby. And the recent one to experience the gift of a new life is none other than the Ambani clan.
On December 10, 2020, Akash Ambani and Shloka Mehta welcomed a cute little baby in their life. An official statement from the spokesperson of the Ambani family stated, “With the grace and blessings of Lord Krishna, Shloka and Akash Ambani became proud parents of a baby boy today in Mumbai. Nita and Mukesh Ambani are delighted to become grandparents for the first time, as they welcomed the great-grandson of Dhirubhai and Kokilaben Ambani. Both mother and son are doing well. The new arrival has brought immense joy to the entire Mehta and Ambani families.”
Recently, we got hold of a super cute picture of dadu, Mukesh Ambani introducing the newborn baby of his son, Akash Ambani to the world. In the picture, we can see Mukesh ji grinning while his grandson was sleeping peacefully in his arms and he was wrapped in a blue swaddle. Check out the adorable picture below:

Shloka Mehta and Akash Ambani are one of the cutest couples, who never fail to make headlines with their adorable PDAs. It was on March 9, 2019, when Akash Ambani and Shloka Mehta had exchanged the wedding vows and it was by far the biggest wedding in India. And we are still mesmerised with their innocent love that clearly reflected in their wedding pictures. For Shloka’s first birthday as Akash’s ‘missus’, the entire Ambani clan did something extra special. On July 11, 2019, her in-laws had made her day super special by creating her own fairytale video. The Ambani family gave her the cutest birthday gift in the form of an adorable princess video, wherein everyone had gotten together to wish their princess, Shloka.

For the lesser-knowns, Shloka Mehta is the daughter of a diamantaire, Russell Mehta. However, being a diamond heiress, she never had any interest in her father’s empire. In an interview with ETPanache, she had talked about the same and had said, “I’ve never had an interest in the business. I think the diamond industry is not very friendly to women. It’s changing but most women typically become jewellery designers or they work in human resources…those kinds of roles. I don’t think that I have the creative aesthetic sense to be a designer.”

2 thoughts on “Mukesh Ambani’s First Picture With His Newborn Grandson, Welcomes The Fourth Generation Of Ambanis”