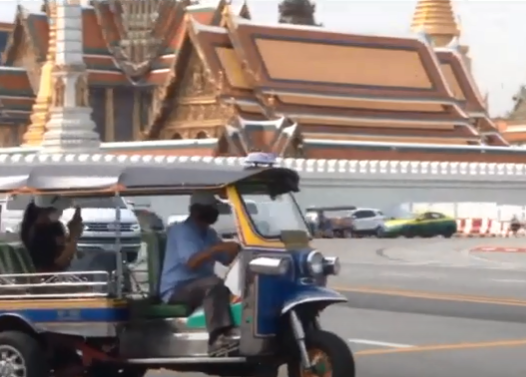 Not many foreign tourists are being spotted around landmarks in Bangkok such as Wat Phra Kaew and Wat Pho, where most of the visitors were domestic tourists.

Staff at a Covid screening point said a little more than a thousand tourists visited the Grand Palace and Temple of the Emerald Buddha yesterday (1 Nov), the first day of Thailand’s ‘reopening’ to foreign tourists. Of all the visitors, only about 100 or so were foreigners and the rest were Thais.

A tuktuk driver nearby said there were few foreign tourists, though he expected more would arrive in 1-2 months. He voiced his opinion that reopening Thailand to tourists was preferable to it remaining sealed off, as people would have jobs. The driver said he had to work as a painter during Covid lockdowns to earn income, and hoped that the reopening to tourists would make things return to normal.

The atmosphere was similar at nearby Wat Pho. A Pad Thai seller in the area said that before the pandemic, the place would be filled with crowds of Chinese tourists. She said it would probably take time for such a scene to return.

More than half of the stalls in front of Wat Pho were closed, with sellers generally waiting for tourist numbers to reach the threshold that would justify opening their shops.