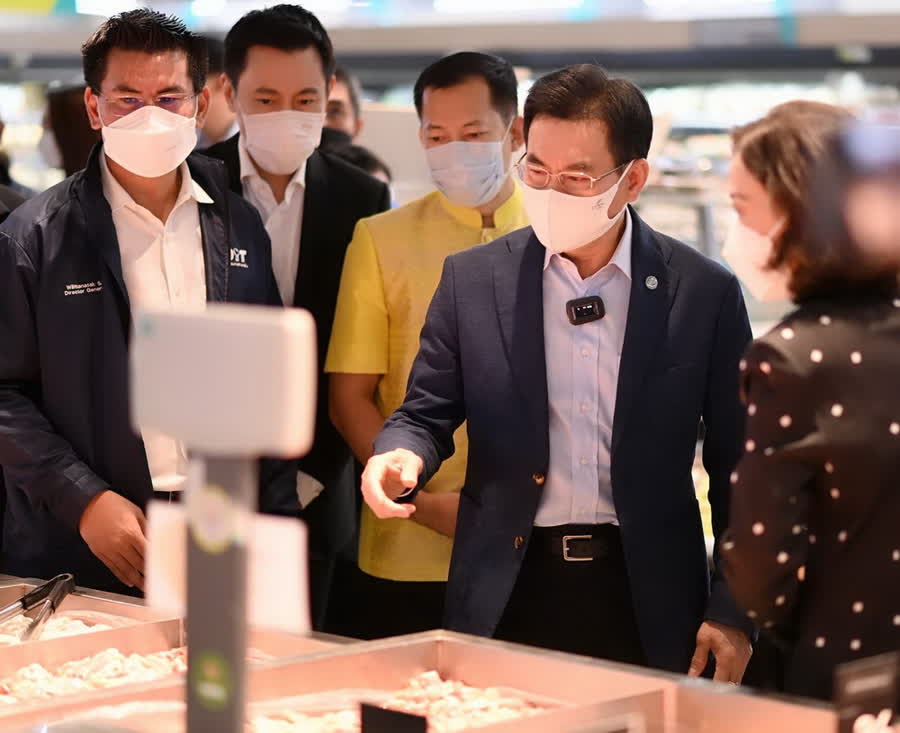 In response to the price appreciation of several consumer staples, such as pork, chicken and eggs, a plan is now underway to establish 3,050 locations at department stores, petrol stations, and community spaces for selling affordable products. The Cabinet will soon be asked to allow the disbursement of 1.4 billion baht from the central budget to fund this endeavor.

Deputy Prime Minister and Commerce Minister Jurin Laksanawisit inspected product prices at Lotus Rattanathibet superstore to ensure compliance with a request from the Ministry of Commerce for retailers to keep prices fixed for the time being. Upon inspection, the minister discovered that the retailer had put products in all categories on discount.

Jurin said his ministry is overseeing the prices of goods while adhering to a “balanced” principle that takes into consideration farmers, businesses and consumers. The Ministry of Commerce has so far banned pork exports to increase domestic volumes, and is currently compiling a nationwide headcount of pigs to facilitate the release of pork into the market. The ministry is also increasing the number of places where pork can be sold for no more than 150 baht per kilogram.

The commerce minister added that chicken producers have been asked to keep prices unchanged, though some have not been cooperating. More discussions are scheduled to be held with the Department of Internal Trade on Monday (17 Jan).

Jurin said 1.4 billion baht from the central budget will be requested at next week’s Cabinet meeting to fund the sale of cheap products at 3,050 sites in department stores, petrol stations, convenience stores, wet markets, mobile trucks and community selling spaces. The sale will run for 90 days.

According to the minister, no upward price adjustment is currently allowed for general consumer goods. Commerce offices in each province have been dispatching personnel to inspect prices and deter hikes.